Stepping Into 2011: A New Diary/Day Planner

This post has been in the works for a couple of days, but I was hoping to wait until I had finished this project before posting. Nothing fancy this time; and the final project definitely looks home-made, but I love it for its imperfection. 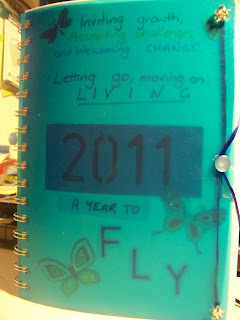 Most people I know use some sort of day planner/diary/calendar, and as 2010 approached, I decided I probably should get back to using one again. The trouble is, I have a habit of using one for about a month and getting somewhat bored of it. At that point, I typically lose it, and since I can't be bothered using it anyway, that tends to be it for me until next year when I vow it'll all be different.

A friend of mine has been making her own for years now so as a gift, we made one for each other. For the first time in many years, I actually spent an entire year using a day planner! Not only that, but it was the same one all year... so it stood to reason that of course I needed a home-made diary/day planner for 2011.

I decided I wanted to make a few changes to my 2010 edition; starting with more colourful pages. I spent a couple of hours cutting coloured papers into rectangles each just under a quarter of the page in size. I think I ended up with about 400 rectangles in 15 different colours/shades; and once that was done I started gluing each in place and dating them as I went. Some of the colours were too dark to write on, so I used a combination of fancy edged white paper (for the day's content) and a thin strip of correction tape for the date/birthday/holiday marker. 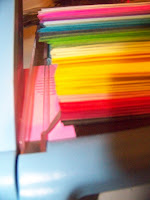 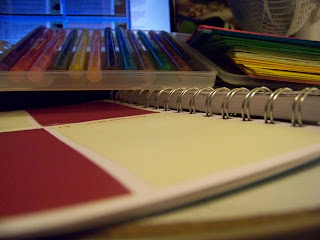 At this stage, I still had a number of pages spare. I'd deliberately left three blank at the very start (for the following pages: cover, personal information & important phone numbers), but I also had quite a few at the back. Some of these I knew I wanted for notes, but I certainly didn't need so many. After a bit of thought I decided the perfect additions were pages for inspirational quotes & messages, affirmations, and photo pages dedicated to people who are supporting me (sometimes actively, and sometimes just by being a presence in my life) in achieving my constructive goals and dreams. I also included a couple of pages for some of the life-changingly-amazing experiences I had in 2010. 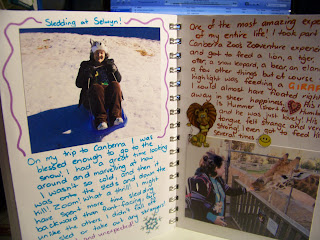 In the end, I merged personal information & important numbers onto the same page and popped inspirations into the front; starting at the very back page you go through affirmations, giraffe feeding and experiencing the snow, before happening upon several pages of my wonderful friends across the globe.

My 'through the months' pages were still missing something, though, so I went back and decorated each new month with a miniature version of my two nieces & nephew, and another 8 people who have made a tremendous positive impact on my life; plus a photo of something associated with one friend.of whom I couldn't use a personal photo. Here's an example of a new month page, using the image of Ezekiel: 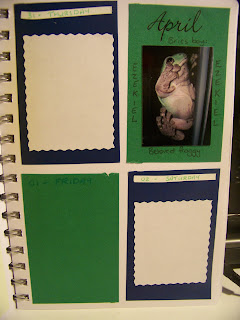 With the rest of the diary finished, I discovered why my friend had been using pens to divide each day's page... my day planner was so full at the very beginning of the year that it was more than twice the size of last year's! I finished off my diary by using some elastic thread, a button and a pair of pretty beads to create a 'tie' to hold it closed.

I'll let you know at the end of the year how well it has survived!
Posted by Chrysalis at 6:50 PM 3 comments:

I know it's been a terribly long time since my last post - two months, in fact - but for various reasons I haven't been very crafty in a while. That changed this week, though, and I've powered my way through the creation of a handful of sequined Christmas ornaments.

Back in 2008, a very dear friend saw how much I was struggling to come to terms with the miscarriage of my daughter, and gave some thought to what might help. She and her partner had me over, and while I visited, she sat me down at her table and taught me how to create beautiful ornaments from something as simple as styrofoam, ribbons and sequins.

And some finished ornaments: 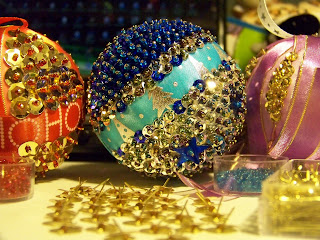 Finally, dedicated in love and memory to Elyssami Faith, this is that very first ornament I made with my friend's help:

One of the things I love most about these ornaments is how much flexibility there is in making them. There's lots of room to play with all the different elements - not just changing colour/ribbon pattern, but there's no rule that says the ribbons have to be placed around the middle, or criss-cross, or any other way. It's all up to how I feel at the time and what materials I have to work with. If you look at that purple ornament a little more closely...

...you can see the trailing legs it has. They're the reason I've nicknamed that style 'The Octopus', and that's something I've been experimenting with recently. They're more fiddly to make, but I think they're really quite interesting when they're done.

Once I get started, the ornaments tend to get finished within a couple of hours, depending whether I need to separate out sequin/bead colours and how tiny the sequins themselves are, but once you get into a rhythm with them it's not so bad. One thing I've discovered, though, is that I'd really like to try using a thimble! Styrofoam may not be overly firm, and my pins may be "cushion top", but after a couple of hours pushing them in through ribbon my thumb bruises.

Most of the ornaments I've made have been gifts for people, but eventually I'd like to organise myself early enough to sell them in the Christmas lead-up. I'm still giving some thought to the prices I'd charge, but any thoughts are more than welcome!
Posted by Chrysalis at 2:32 AM 2 comments:

I've been meaning to set up a creativity blog for a little while now, but it's taken until now to get around to it. LBC will be a mish-mash of different creative projects in various stages of developments. LBC was inspired by Sairs of Creating Sarah's Way and Jennifer of magnificasti mirabilia.

To start things off, the dreamcatcher I made to exhibit in the CASV art exhibition for Sexual Violence Awareness Month, in full view. To give you an idea of the height of it, if I stand and hold it with my arm above my head, it reaches my waist. 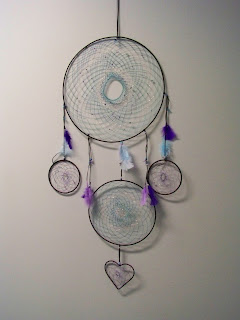 And, split into two, so you can see a few more details on the different sections: 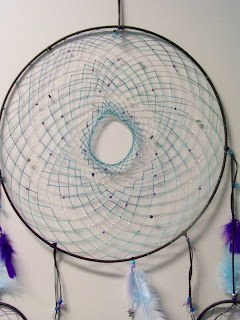 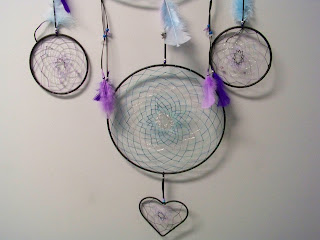 At first I wasn't sure what colours to use, but when a friend suggested the teal and purple with silver, I knew it was perfect - those are CASV's colours, and it felt very appropriate. In the closer shots, you can just make out some of the beads on the webbing - the blues DC has tiny round purple beads while the purples DCs are threaded with matching tiny aqua beads. The silver has a mixture of gem stone pieces - sodalite (insight & intuition) and aventurine (healing) on the blues DC; amythest (a dream stone) on the purples DCs.

You can't see in the photographs, but I used several types of beads on the tassels. A couple of different colours of pony beads generally hold the feathers in place, but I've also used a selection of purple, blue and clear heart dangles on the tassels.

All up, I couldn't even tell you how many hours this took. The webbing on the main DC alone took several days. Let me tell you something, though -- it was worth every second.

Along with several other works, I've put this up for Silent Auction; any suggestions on how much to accept, should anyone offer to purchase it, would definitely be appreciated!
Posted by Chrysalis at 1:55 AM 4 comments:

My Places In Cyber-Space

Dialectic Dichotomy
--A post-DBT look at life as I recover from Borderline Personality Disorder.

From Another Angle
--My photography blog.